Earn $2 - 14 in store credits upon purchasing this product.

Background
Platinum Kush is a premium, first-rate indica cannabis strain. This striking strain is the product of a cross between OG Kush and Afghani. Also commonly known as “Platinum Kush OG”, the strain has a uniquely colourful bud and an amazing, relaxing high. With a nice THC content of around 20%, this quality strain can easily be enjoyed by both recreational and medicinal users.

Appearance, Aroma, and Flavour
Platinum Kush’s aroma and flavour is a mixture between sweet and skunky. The flavour tends to first have a sweet, fruity taste before turning into a skunky, bold flavour upon exhale. The aroma is similar, although the lingering smell is primarily the classic skunky cannabis scent. The appearance of the bud certainly fits in with its name in that the medium-sized light green buds have an almost metallic appearance from their heavy coating of pure white crystal trichomes.

Effects and Medical Uses
Platinum Kush is notorious for its slow onset high. The high typically begins in the head with a heaviness that slowly seeps into the rest of the body. Relaxation is the primary effect, along with a spaciness that inspires creativity and even focus. Medical marijuana users often use Platinum Kush as a treatment for chronic pain, difficulties with focus, anxiety, and depression.

Nice nose, flavors and smoke.
Would buy again if on sale.

Title says it all... Good stuff... Ill be ordering this again next time 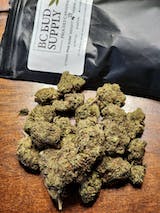 First thing that hit me was the smell nice to smoke got here in two days nice going Budsupply.

Very much like candy, you get a few bags for the weekend and you have to control yourself not to eat it all! Very nice but it did make me a little drowsy and a little lazy, I must confess. so it's not something I'd toke on a lunch break or before going into work....but it does help you sleep well!