Earn $2 - 80 in store credits upon purchasing this product.

Background
Platinum Gas Mask is a rare, highly potent, top grade quality strain of marijuana. A strong 90/10 indica dominant strain with some sativa effects, Platinum Gas Mask is the child of a cross between Platinum Kush and Gas Mask, both of which are known for being high in THC. It’s a strain that is definitely not for the inexperienced users, but will be very much enjoyed by cannabis cannaseurs.

Appearance, Aroma, and Flavour
Platinum Gas Mask is an intense strain with an equally intense aroma and flavour. The strain has a skunky, earthy taste, which gets passed along to the aroma, although a hint of sweetness lingers in the air when smoked. The buds are dense, sticky, and forest green with a smattering of purple and orange hairs.

Effects and Medical Uses
Platinum Gas Mask is an indica strain that won’t let you down. The effects are intense, quick to kick in, and long-lasting, often setting in just a few moments after being smoked and lingering for hours. Users will experience a quick onset of spaciness and a disconnected feeling, almost as if they’re floating. Next, a heavy sedation sets in leaving the users with feelings of extreme relaxation. Be warned – Platinum Gas Mask can leave the inexperienced weed smoker couch-locked for hours until the effects finally wear off. These potent indica effects make it perfect for treating insomnia, depression, stress, and chronic pain.

I'm not even half way through the oz I bought,and ima ordering more asap! Wicked weed! Nice sticky stinky STANKY buds, in 30 seconds of chopping up a joint, my wife knows from across the house that I'm rolling one without even telling her! Hahaha 👌 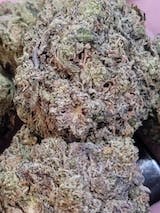 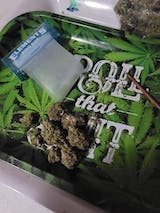 Thanks for the high

Pure fire, highly recommended this one. It’s gassy that’s for sure.

These were some tight Beautiful buds!! 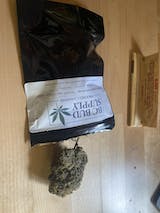