Earn $1 - 18 in store credit upon purchasing this product.

Hash or hashish is known as being one of the oldest form of cannabis concentrates with recorded usage that dates back to over 900 years ago, although it has probably been used for much longer. Hash has a long history in the ancient regions of Afghanistan, Egypt, India, Iran, Morocco, Nepal and Pakistan before it eventually made its way to Europe in the 18th century. It is made using the cannabinoid rich trichomes of the cannabis plant along with varying amounts of the flower and leaves. The trichomes are pressed using heat into a solid but malleable cake or brick that is brown or reddish in colour. Hash is typically consumed through smoking using a pipe, bong, joint or vaporizer, and has THC levels between 15-25%.

Great product inconsistent texture, plyable but worth another purchase!

A good buy, expensive, but a nice treat. My friends loved it. 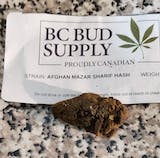 This was kinda disappointing didnt get me high as the other hash I purchased before. 2/5

love the taste. the buzz is excellent.

gota clean my pipe - to catch the vibe

Good hash. A bit dry compared to Gevalia. Maybe Mazar Sharif II hash is a bit softer.
It's good to have hash from Afghanistan, Lebanon and Morocco available again.