Earn $1 - 73 in store credit upon purchasing this product.

Background
Snow Lotus is an indica hybrid that is perfect for those who are seeking a potent strain with calming and paranoia-free properties. While relatively high in THC content (25%), Snow Lotus produces a mellow high that allows users to remain energetic and functional. Bred by the breeders at Bodhi Seeds, Snow Lotus combines the genetics of the potent Blockhead with the super-sticky Afgooey, giving rise to Snow Lotus’ nickname “Goohead”.

Appearance, Aroma and Flavour
Snow Lotus’s buds are covered in a frosty layer of white crystal, and are typically small and clustered. The aroma produced by this strain has a sharp scent of earthiness coupled with a skunk-like vibe that greatly intensifies when the nugs are broken up. When burned, this strain emits a diesel odour that contradicts its smooth smoke and sharp floral aftertaste.

Effects and Medical Uses
Snow Lotus gives users a fast-acting high that soothes anxiety and calms the mind, producing a mild body buzz that rarely leads to couchlock or lethargy considering it is a potent indica. The effects from Snow Lotus comes on quickly, and the initial focus in the head blunts anxious or racing minds, before it begins to put the body into a relaxing, mild sedation. Although it’s high in THC, fans of Snow Lotus say that the high has a lower propensity for paranoia, which make a favourite for medicinal users who are mainly seeking the medical benefits that cannabis offers. The overall energizing sensation also makes this an attractive option for daytime use.

Good smoke 👍 really enjoyed this one 😊

Very happy with the quality

This strain has a pretty good taste, I would recommend this stuff

TOP PICK OF THE BATCH - WORTH TRYING 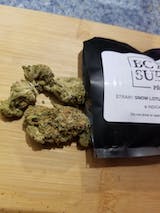