Earn and collect points that can be redeemed for in store credit with every purchase you make. If you refer a friend to us who makes a purchase, you will both instantly receive a $15 credit.
Featured Products
Blog
New

Earn $1 - 4 in store credit upon purchasing this product.

Background
King Louis XIII is a rare indica dominant hybrid cannabis strain made by combining OG Kush and LA Confidential. It has a high percentage of THC of around 25% and was named after the King of France in the 1600s because it was specifically grown to have a high THC potency. Due to its strong potency and effects, King Louis XIII may be better suited for experienced smokers.

Appearance, Aroma, and Flavour
King Louis XIII has dense, light green buds with orange pistils covered in a layer of white trichomes. The heavy coating of white trichomes makes this bud very sticky when touched. The strain’s flavour and aroma profile is very citrusy with pungent, piney and earthy tones. The citrus comes from King Louis XIII’s dominant terpene, limonene. It also has a spicy and diesel aroma because of its parent strain, OG Kush.

Effects and Medical Uses
King Louis XIII brings in many properties from its parent strain, OG Kush. Users get a deep relaxing feeling throughout their bodies that increases over time along with a mood boost and feelings of euphoria. The relaxing, sedative effects of this strain are a perfect choice for those who suffer from insomnia, stress, anxiety or chronic pain.

Nice fat joint (got the 1.25grams) that was more than enough for a circle of 5 people :) 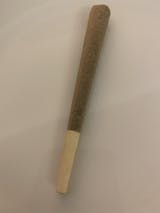