Earn $1 - 11 in store credit upon purchasing this product.

Background
When you want a hard-hitting indica, look no further than Bubba Rock. This Canadian strain hails from beautiful British Columbia and is crossed between the notorious Bubba Kush and the ever-powerful and infamous Rockstar. Known by a few names including BS Rockstar, Rock Bubba, or Rockstar Kush, this wildly popular BC bud is a true indica enjoyed by both recreational users and medicinal patients. With THC content that ranges from 22% to 25%, Bubba Rock has a potent punch that can knock out any beginner on first blush.

Appearance, Aroma and Flavour
Bubba Rock has thick and tight spear-shaped light green nuggets. Weaves of bright orange pistils peek through the thick layer of sparkling, crystal-like trichomes. The strain’s distinctive pungent skunky aromas let you know that it is one potent indica. Notes of earthy pine, spice, and even berries round out the aromatic profile. Its flavours are similar with a pungent yet sweet earthy taste.

Effects and Medical Uses
Bubba Rock’s potency helps make the strain a fast-acting and long-lasting sedating experience. The high begins with cerebral euphoria and heady delight. After calming any mental anxieties, the high begins to physically work the body. An ebb and flow of relaxation begins to buzz, making the user feel heavy, sedated, and locked to the couch. Soon enough, the munchies take over with full force so be sure to have your favourite snacks nearby in case you get completely debilitated. Medical patients enjoy medicating with Bubba Rock since it is a great strain to ease pain, anxiety, insomnia, and appetite issues. Due to its potency, Bubba Rock is best enjoyed at night for an evening sesh or when you’re ready to knock out.

Found didn't smoke to well always needing to light it up.

Maybe this was a one off....it arrived moist and looked great for triple A. This flower does not burn clean and a lighter will be your best friend. Nice buzz though.

Perfect for a late night buzz

Gonna order again for a gift

A
Ashley B. (Casselman, Ontario)
GIft for my Friend

My friend liked it and wants to order from bcbudsupply now! I found it as good as the captains' cake that I ordered that cost a bit more, while on sale. He said he would smoke it again! 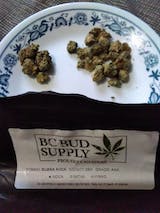