Earn and collect points that can be redeemed for in store credit with every purchase you make. If you refer a friend to us who makes a purchase, you will both instantly receive a $15 credit.
Featured Products
Blog
Sale!

Earn $2 - 80 in store credits upon purchasing this product.

Background
Soothing and sedating, Birthday Cake is a popular indica-dominant hybrid strain that is also known as Birthday Cake Kush. A cross between Girl Scout Cookies and Cherry Pie, the strain has a high THC level totalling up to 24%. The strain is known for its deliciously sweet flavour that tastes remarkably like its namesake. It’s popular in the medicinal community for its high potency and effectiveness, but may be too strong for some new users.

Appearance, Aroma, and Flavour
Birthday Cake’s name perfectly describes its taste. When smoked, users will notice a rich, sweet vanilla flavour, much like birthday cake, with a somewhat earthy and nutty aftertaste when exhaled. The smell has a lingering scent of vanilla, with undertones of skunkiness. The bud itself is even similar to a birthday cake, with forest-green nugs decorated with a frosty white layer and reddish-orange hairs.

Effects and Medical Uses
Birthday Cake is an indica-dominant weed strain that provides a wonderful head and body high. The high begins with a burst of happiness and euphoria, boosting your mood before settling you into a deep, carefree relaxation, which eventually lulls you into a sedated, peaceful sleep. It’s great for helping those anxious in social situations feel more at ease, and is often used to treat anxiety, pain, stress and even insomnia.

This is great for my insomnia, would recommend 👌🏻 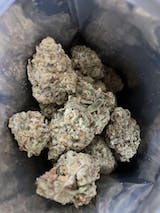 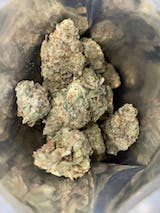 Yea def can't go wrong with Birthday Cake Kush. Delivers on every front including the fact that it gets me higher than a kite, looks beautiful and fresh, and has an amazing smooth taste. DEfinitely a strong quad!! 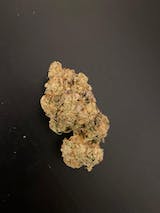